Skip to content
Home » Body Language » Arms » Arms crossed with thumbs up: Superiority or pride in oneself 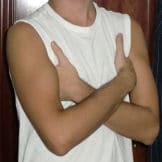 There are some postures that we may see repeatedly in people we know, and we may even imitate someone by taking that posture, and yet not be aware of what the posture reveals about the person. That's why, something I love about body language, is when one day you explain to someone the meaning of a posture and say: "well, it's true! such and such a person puts that position many times and they are like that!" I make that introduction because this posture, that of the arms crossed with the thumbs up is one of those postures that we may have seen in some people but that until now we have not been aware of what it meant, and that is that the arms crossed with the thumbs up is a posture that reveals confidence in oneself, superiority over the others who are present. Have you thought of anyone? As I said, this posture is used by people who are perhaps more physically gifted than others (that is, who have musculature), who believe themselves to be more handsome or smarter, or who simply consider that the people they meet are inferior. Although this posture has a nuance with which you have to be careful, it is also a posture used by people who are comfortable with themselves, who are proud of their body or their way of being but do not boast about it, although normally for this purpose it is only used by introverted or shy people.

Do you know the meaning?